Following 9/11, Congress recognized the unique challenges of insuring commercial enterprises against terrorist attacks and passed the Terrorism Risk Insurance Act, or TRIA, in November of 2002. TRIA established a risk-sharing mechanism for certain commercial lines that allows the federal government and the insurance industry to share losses in the event of a major terrorist attack. The program was designed to ensure that adequate resources are available for businesses to recover and rebuild if they become the victims of a catastrophic terrorist attack.

The key elements of the program include:

Since its initial enactment in 2002, the Terrorism Risk Insurance program has been revised and extended multiple times. The current extension will expire on Dec. 31, 2027. 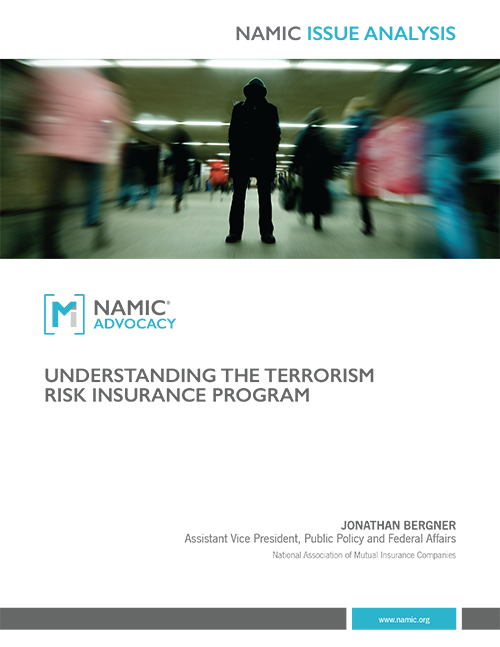 Understanding the Terrorism Risk Insurance Program (PDF)
Since the events of September 11, 2001, the federal government has developed a robust and sophisticated counter-terrorism apparatus that has thus far succeeded in preventing large-scale terrorist attacks on the United States homeland. However, the threat of terrorism is continuing to evolve amid a changing, unstable, and dangerous international environment. This paper explores the TRIA program, a risk-sharing model between insurers, policyholders, and the federal government that has acted to create space for a robust private market for terrorism insurance to form where it would not have otherwise.
(Published 03/26/19)

NAMIC supports the current Terrorism Risk Insurance Act program and believes it is as necessary today as it was in the wake of the tragic attacks on Sept. 11, 2001. The TRIA program is working as intended and has led to a flourishing and robust market. Congress should act as swiftly as possible to reauthorize the TRIA program without alteration to its existing structure and without any damaging lapses in its authorization.